The most popular variety of green baby squash, it is entirely tender and edible. Baby squash is best not “overdone” and note that it does cook rapidly. Averaging between 30-35 pieces per pound, cook as you would conventional soft squash, but for much shorter periods of time. Even though baby squash is more expensive than other varieties: they are well worth the price. Consistently admired by culinarians and general consumers, alike: use them and capitalize upon their inherent appeal. Use just a couple of pieces along with some baby beets, turnips or carrots, or combine with sautéed spinach, slices of purple potato, or other “less expensive” vegetables to reduce portion costs. Another trick is to cut the baby squash in half and lay upon the plate (cut side down) for a beautiful presentation that is “half” the cost! Baby squash is more perishable than its larger and harder counterparts, so please follow these handling tips: Although not an ethylene gas producer itself, it is sensitive to it, so store away form ethylene gas producing and odoriferous produce, as well. Store covered, dry, and out of drafty conditions, between 40-45 degrees F. Green varieties tend to hold-up better than the yellow, although this should not discourage the use of yellow squash, as it is far more beautiful than perishable! Less than perfect baby squash is not altogether useless! Try scoring and grilling specimens (ones that have perhaps wrinkled a bit, become spotted or stained), until tender, cool and then marinate in an oil and vinegar based dressing, heavy with fresh herbs. Use these delicious grilled and marinated squash atop swizzle sticks as a garnish upon cocktails like: Bloody Marys and Martinis. Use them sliced or whole upon both starter &/or entrée-type salads. Garnish vegetables and entrees with them as well. Delicious. And, who needs to know you’re being frugal? We’ll never tell! 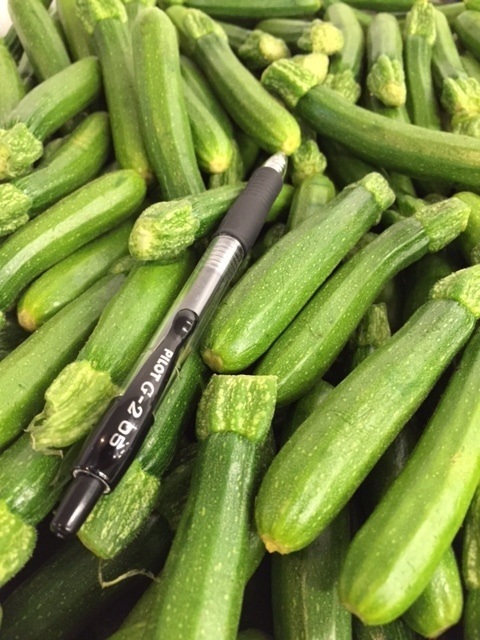